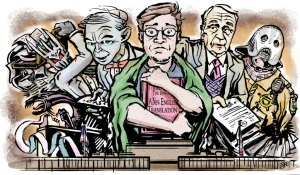 I have an article up at The Toast, called “How I Defeated the Tolkien Estate”, a satirical short story about me being a Hobbit Studies scholar who discovered an unauthorized copy of the “Red Book of Westmarch,” published my own translation of The Lord of the Rings and, was subsequently sued by the Tolkien Estate. It’s accompanied by an amazing set of illustrations by the artist Jason Longo, including Balrog judges, Gollum as a sleazy lawyer, Elrond serving papers, a dessicated dwarf dressed as an University of Chicago undergrad, and yours truly as Frodo.

The inspiration for the piece is Tolkien’s own claim, in the Lord of the Rings appendices, that he is merely translating Bilbo and Frodo’s own writings as collected in “The Red Book of Westmarch” (you can see Ian Holm and Elijah Wood writing in the Red Book in Peter Jackson’s LOTR and Hobbit trilogies). Tolkien always posited Middle-earth as our own earth in a more ancient and mythical time, and even his earliest Middle-earth writings (dating to 1917) that conceit is there: this isn’t fantasy, it’s history.

A number of authors have claimed their texts are “translations” from some other book or manuscript (see also: The Princess Bride), but Tolkien, being a linguist, took it a step further. Think “Samwise Gamgee” is a strange, fantasy-sounding name? It is. But, according to Tolkien, it’s also a translation, rendered into a vaguely English-sounding name from the original Westron. Samwise’s true name? Banazîr Galbasi.

It’s this sort of multi-layered nerdery that’s made Tolkien’s books so popular over the decades. For the piece, I decided to take Tolkien at his word, and take the conceit to its absurd end. If Tolkien is merely a translator of an ancient text, what would happen if someone else found “The Red Book” and translated it? And what if that someone liked making jokes about hobbit sex and orc dicks? What would the famously litigious Tolkien Estate do?

The piece has gotten a lot of great feedback and been shared all over the place: currently over 2,000 times on Facebook, nearly 4,000 times on Pinterest, even 230 times on Google + (I’m especially touched that 230 people opened their dusty Google + accounts after years of neglect just to share my piece). It even got its own write up at io9.com, one of the biggest scifi/fantasy sites around, who called it “incredibly funny” and “hilarious.”

Some people have actually responded too well, and have searched for/asked me where to find The Lord of the Rings: A New English Translation (traffic on this blog has spiked thanks to people searching for my name and that title – sorry y’all!). I admit, I’ve been a little amused by the number of people who’ve thought the story true.

But mostly, I’m just overwhelmed by the positive response. As a writer, it’s been incredibly gratifying to have so many people reading and liking something I’ve written! Honestly, it’s a dream come true.

Getting a piece published at The Toast is also basically a dream realized. It’s my favorite website. I’ve been wanting to pitch them something for a while now, but never had any ideas I thought worthy of them.

Then a few months ago, the great Mallory Ortberg of The Toast wrote a typically hilarious and smart piece called Signs the Book You’re Reading Is Going to Be a Good One, such as “a good map, with plausible coastlines.” In the (ever excellent at The Toast) comments, commenter ecurve added, “The author claims, or loudly hints, that the story is actually true and was only *translated* by him/her.” To which I made a silly comment about beating the Tolkien Estate in court when I published my own translation of the Red Book. Mallory then replied, “YOU MUST WRITE ABOUT THIS FOR US” and after a few hours of panicked, imposter syndrome hyperventilating, I got to work.

And the rest is fake history.

View all posts by Osutein

7 thoughts on “The Real, Fake Red Book of Westmarch”